Having moved from Tampa a couple of years ago, I always wondered why Atlanta only had one SQL Saturday per year.  While Tampa has two SQL Saturdays, one regular event and one specifically for Business Intelligence (BI).  Atlanta, however, is the big daddy of SQL Saturdays (ok, ok, technically we are the second biggest SQL Saturday in the world but only by a few people and only because our venue will not physically hold anymore people thanks to that darned Fire Marshall and his silly rules about people cramming into a room).  Thus, it seemed only natural that Atlanta would also have a BI event with such a vibrant BI user community here.

In my consulting role at Innovative Architects, I’ve been doing quite a bit of BI projects and I absolutely love having irons in both fires.  In addition, there were a lot of people here that were interested in helping with an additional SQL Saturday.  We just needed a push to get it off of the ground.  Enter my co-worker Damu Venkatesan (t) who said “OK, let’s do this now!”  A few months later and we have moved to the wait list for registrations, we have almost sold out our sponsorship slots, and we have an amazing line-up of speakers.  Maybe I am biased, but I’ve been to at least thirty SQL Saturdays in my career and I think this is as good of a schedule as I’ve ever seen.  After the schedule was announced, the registrations filled up at a frantic pace.

We also had a few big names in the community submit pre-conference training abstracts for Friday, January 8th.  We ultimately decided on having two sessions for our first year even though we had several great submissions.  We finally decided upon SSIS Design Patterns and BIML: A Day of Intelligent Data Integration by Andy Leonard (b|t) for our first session.  Our second session, Microsoft BI In a Day, is being presented by Microsoft employees Patrick Leblanc (b|t) and Adam Saxton (t) who is also known in the community as Guy In A Cube (yt|t).

Below are some PowerBI visualizations, because this is a BI SQL Saturday!  Enjoy! 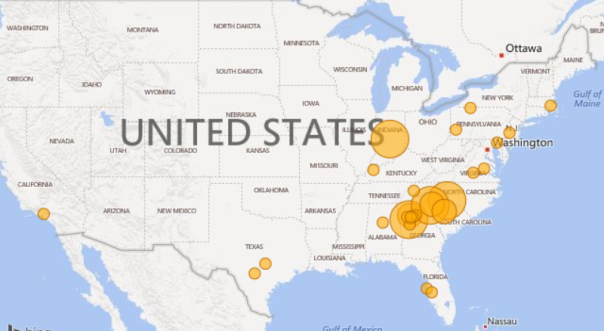 #SQLSatATLBI Speakers From Across the Country

Microsoft Data Platform MVP, Florida Gator, Star Wars fanatic and is there anything else...oh yeah PS4! I am a geek and SQL Server Business Intelligence Consultant, there are other technologies greater than these? Not so fast my friend! I also love to travel to new and exotic places.
View all posts by SQLGator »

This site uses Akismet to reduce spam. Learn how your comment data is processed.